I know I promised to stop writing to maintain anonymity and neutrality of my personal beliefs both in and outside of the classroom, but I have had such a visceral reaction to Bo Burnham’s Eighth Grade that I need to write to sort it all out.

Why must I do it publicly?

Alexa, these are private thoughts. These are things we are not supposed to talk about. So, why must I blog about it? Right? Why not write it down in a little journal next to the nightstand? I can’t explain why. 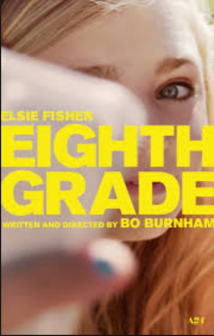 Maybe ask Kayla Day, the lead character in Eighth Grade. She makes YouTube videos with advice from her experiences, much like this blog, and much like my old cringe-worthy blog from middle school on Journal Space.

I was super shy then. Maybe I still am a bit. How could I post rambling blogs of the most menial parts of my day and the most private revelations on a public website, but when it came to walking the halls of middle school, I couldn’t even muster small talk? I don’t know. I don’t know how I could be so confident through a screen, but when faced in person, cower from insecurities.

Much, much later in life, I discovered I suffered from General Anxiety Disorder. I remember being shocked when my doctor told me that it wasn’t normal to stress about having to go to a social event the entire preceding day before. It wasn’t normal to plan my meals around “safe,” bland foods if I knew something “scary” (like a work meeting) was coming up to prevent an upset, rumbly tummy. It was in this moment when I thought I was going to figure out the root of my “food allergies,” that an aghast doctor recommended medication to combat this abnormality. I realized then that my years of nerves as a teenager were because I have an anxiety disorder.

Or so I thought until I taught freshmen. I realized then that these “anxiety disorders” were rampant through the halls of high school. I brainstormed why there was so much anxiety amongst this generation of teenagers: technology? Difficulty of school? Disengaged parents?

I will be honest when I heard that Bo Burnham (one of my favorite comedians!) was making a movie about what a teenage girl goes through in middle school, I was offended that he would try to portray such a complex experience: how could he know what it is like? I was so wrong.

I think I was so protective of this experience as an 8th grade girl because it was the worst year of my life thus far. I was bullied incessantly. Mocked. Tormented. Until my sophomore year of college, I sympathized with myself as a poor, helpless victim. As I got older, I realized that I was a brat. If someone could deserve to be bullied–or one of the more detestable phrases, “asked for it”–it was me in middle school. What a horrible thought though; do people deserve to get bullied? No, but I was a snob. I was also weird. I wore the most flamboyant outfits.  Someone told me once that I was fashionable and so I thought I was cutting edge when I wore a Hawaiian dress with four strings of pearls paired with patterned knee socks. 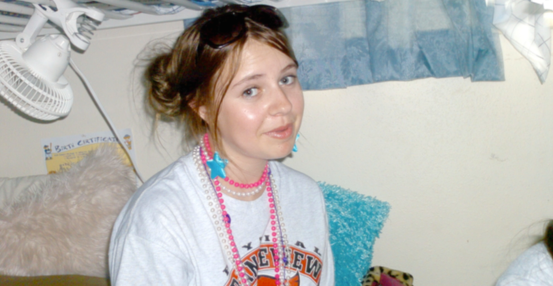 Whenever I see pictures of myself, I bemoan my life choices. I always think, “Gross. I was so ‘cringy'” But I was also a know-it-all. I hate to admit this, but I thought I was better than other people: I invested in my education (I was “smart”). I followed the rules. I lived like you were supposed to. And I judged people who made different choices. Maybe I was the bully?

8th grade is so bizarre.  I try to forget that it ever existed, but I also can still feel that magnified terror and anxiety of social judgment.

Whenever I discover a fleck of pepper lodged into that one crook of my tooth (or Heaven forbid, I say something stupid!), I am transported to that terrified 8th grade girl. Cue the nervous script of horrors. They they think I am oblivious. They think I am stupid. They think I disgusting. This is what I get for opening my mouth. I should just shut up and try to be invisible.

As an adult, I have more “perspective.”

Don’t get me wrong, I still get that feeling of utter dread walking into a big social event: What if no one will talk to me? What if I am all alone? What if people think I am a social outcast? And then I remember that my worth is not defined by my ability to maintain small talk. I have done this, this, and this. No one cares about what I do anyway. The world does not revolve around me. I know who I am and what I can do. I am not defined by what people think of me.

However, for a lot of teenagers, they haven’t realized that it doesn’t matter what people think about you. They don’t know if it “will all work out” in the end.

I think the reason that we have this great fear of what people think is because when we are young, we don’t know “who we are.”

We get our understanding of “who we are” from everyone else’s perception of who we are. So when you don’t know “who you are,” you care an awful lot about what people think of you.

That is what sucks about being a teenager.

I owe an apology to all of my high school students over the years. I have scoffed at the whining and complaints with the retort that “it just gets harder.” You have bills. You have to work all the time. You have to be responsible. We always tell kids to enjoy being kids because being an adult is so hard. And it is.

But so is being a kid.

I would never want to relive 8th grade. Ever. I’m glad for my experiences. I’m glad that I was confronted with my own narcissism, but there is no amount of money that would convince me to do it again. I’m so relieved that I am no longer that malleable little girl trying so desperately to do everything perfectly to be the person that I want to be. I am me. Like it or not. It is all I will ever know.

We take for granted the self-assurance we naturally get as we age. The level of insecurity and vulnerability in adolescence is both terrifying and precious. And Bo Burnham captured it so perfectly in all of its grotesque awkwardity* and momentous self-realization. I don’t think I’ve ever felt this much from a movie. Sure, I have thoughtful and provocative conversations around good movies, but from the time that I left the theatre after Eighth Grade, I haven’t been able to talk. Just feel.

Feel the pain of trying to fit in.

Feel the joy of accomplishing something scary.

Feel the love of a parent and child.

Feel the devastation of rejection.

Feel the pride of who I am now.

Gah, “who I am” is such a vile phrase.It sets an unrealistic ideology that you have to become a final draft of a unique person–completely ignoring that life is just a process.

Your “self” is just a constantly evolving entity responding to life’s experience.

I can’t imagine how much more confusing this notion of identity is with the dawn of Snapchat and Instagram, but I know what I will do moving forward. I will be much more sympathetic with the quirks of pre-teens and the angst of my students because adolescence is a tough time. And adolescents deserve a hell of a lot more credit for fearlessly pursuing their fandoms and experimenting with “who they are” despite the previous generations’ constant rejection of what they do. Stop judging teenagers. They have to figure out how to survive in a world that is constantly changing while warped in the wrath of insecurities.

*”Awkwardity” is not actually a word, but now that I am a somewhat-semi-confident adult, I don’t care. Shakespeare did it. And I have an English degree.

Balancing teaching high school English and mothering a wanna-be-labrador-shih-tzu, I am a neurotic twenty-something doing my best in the exotic suburbs of Colorado.